Aquatic Contracting (AC) teamed with McBain Associates (MA) to develop a restoration concept for the Upper North Fork Reservoir of the Clackamas River. The concept was presented to Portland General Electric (PGE) at their 2015 Clackamas Habitat Funding Cycle.

The project concept was accepted and funded with construction commencing in 2016. The Upper North Fork Reservoir was considered a dead zone from a fisheries standpoint and although it had good water quality it lacked any habitat features and was considered a monoculture. AC and MA felt that strategically placing log jams would help provide habitat and cover while creating diversity throughout the restoration reach. Additionally, the log jams would benefit PGE’s hydroelectric facility by recruiting wood during high flows thus keeping it out of the main reservoir and the hydroelectric facility.

However, the project presented many challenges. First was getting materials to the site. Because there was no road access and the plan called for nearly 400 logs and logs with root wads, AC had to formulate a plan to safely and efficiently get this material to the site. The solution was to utilize one of PGE_s boat ramps in the lower reservoir and construct large logs rafts. These logs were then towed to the restoration site using small tugs. Once the rafts were as close to the site as possible, they were anchored in place until the construction process started later in the year. Second was to feasibly access to the restoration site with heavy equipment. Because the bulk of the log jam construction was to occur within the thalweg of the Clackamas River and along the opposing bank, AC had to get equipment in and through water that was up to 6 feet deep.

Working closely with PGE, AC and MA utilized bathymetry to find a suitable crossing area and then slowly lowered the reservoir after the summer recreation season. In late September the reservoir was at a level that allowed machinery to cross and construct jams throughout the entire site. To insure log jam stability AC utilized its SP-80 excavator mounted vibratory pile driver to install pilings throughout each log jam creating a stable foundation and long-term stability.

The last challenge was getting fuel to the excavators during construction. AC utilized their tracked morooka dump truck to safely transport a fuel cell to the island where a bulk of the work was done and created a fueling area in an approved location which was able to supply fuel for the duration of the project. AC returned in the fall by boat to install plantings throughout the log jam areas and on the log jams which were in the middle of the river.

Because the project was completed under budget AC and MA were able to return in 2017 for additional work including more log jams and the creation of an alcove and side channel.

The Upper North Fork Reservoir was considered a dead zone from a fisheries standpoint and although it had good water quality it lacked any habitat features and was considered a monoculture. 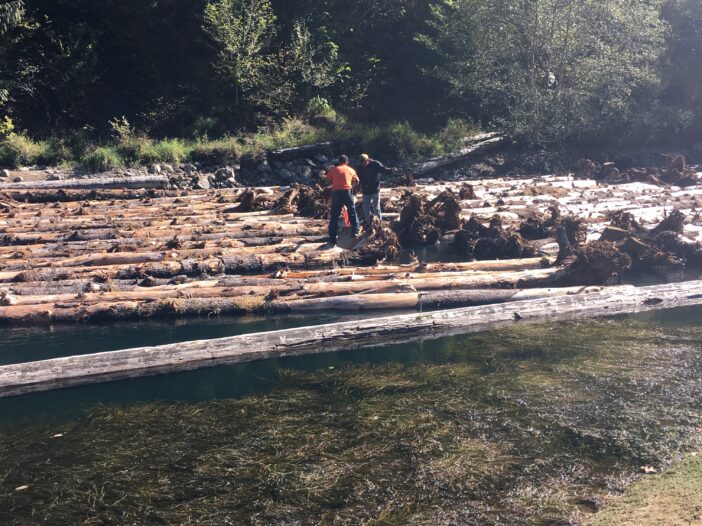