Beginning in 2008 Aquatic Contracting (AC) began working with the Sandy River Basin Partners, including the BLM, The Freshwater Trust and The United States Forest Service to implement a decade of basin wide restoration efforts on The Salmon River and Still Creek.

The first project constructed on the Salmon River was awarded to AC on a design-bid-build basis and featured 100% drawings along with engineer oversight. However, because of the dynamic river conditions along with difficult site conditions the partners went to a design/build basis the following year. This change allowed AC to provide construction design, cost, and feasibility input, utilizing its expertise and knowledge to assist owners and designers (the team) with initial project planning. This resulted in enhanced team communication, more effective use of funds, and greater efficiency during project implementation and construction.

The result has been the construction of 106 large wood structures and placement of nearly 3,200 individual pieces of wood, 320 strategic boulder cluster, and replacement of 2 fish passage culverts. Additionally, nearly 3 miles of side channel has been restored along with the construction of 2 large off-channel ponds and the re-connection of 10 acres of wetland. These projects were implemented in an effort to increase pool density, recruit spawning gravel and provide juvenile rearing area. Since restoration began the number of spawning Steelhead has increased as much as 170% within the 2 mile restoration reach while the number of out migrating Coho and Steelhead reached record numbers in 2018.

Since restoration began the number of spawning Steelhead has increased as much as 170%. 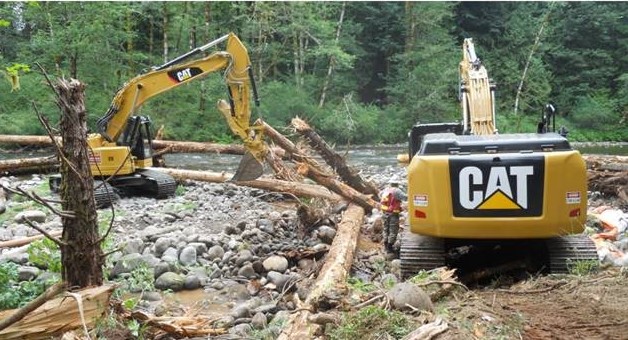